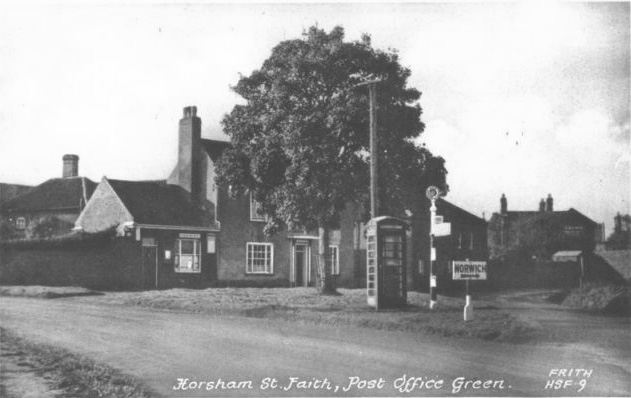 Horsham St Faith is a village in Norfolk, England. The village lies close and to the east of the A140 road and is 5 miles (8.0 km) north of Norwich and some 8 miles (12.9 km) south of Aylsham It takes its name from the River Hor, which runs through it on its way from Horsford to Horstead; and a Benedictine priory, founded in honour of St. Faith that, until the dissolution of the monasteries, stood there. ~Wikipedia

Nothing much has changed here, except that the building is no longer the Post Office, although it still bears the name ‘Old Posthouse’. Shame about the nice telephone box that has disappeared now…

In Kelly’s Directory of 1900 the Postmaster was Thomas Fox. Thomas Fox appears in the 1911 Census, with his occupation filled in as ‘Inspector of Nuisance’, his wife Mary being ‘Sub Postmistress’.