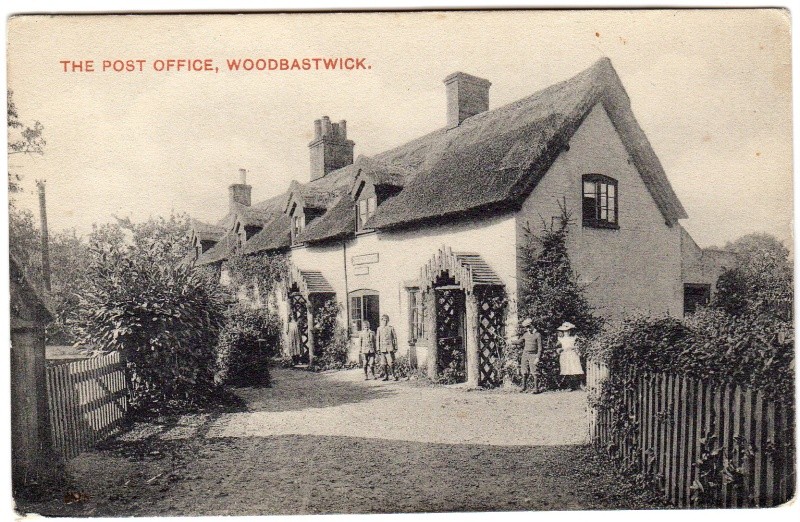 Woodbastwick is a village and civil parish in the English county of Norfolk. It is located on the River Bure between Cockshoot Broad and Salhouse Broad, within The Broads National Park and close to Bure Marshes NNR (National Nature Reserve). The city of Norwich lies 10 kilometres (6.2 mi) to the south-east. ~Wikipedia

The village name relates to bast, a pliable substance found under the bark of the lime tree. Danish and Saxon invaders used bast as a form of binding to tie leggings and other items. As a consequence, Woodbastwick’s village sign shows two invaders tying their leggings.

In Kelly’s Directory of Norfolk 1900 the Postmaster is listed as one Rueben Green. In both the 1901 and 1911 Census’ he is described as a carpenter alongside his wife Louisa. The address for 1911 is The Street, whereas now it is called Horning Road.

As can be seen in the above postcard; the building has had some modification but still resembles the old form in most ways. This is the right spot according to the First Edition OS Map, as can be seen below. 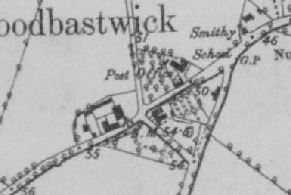 The Post Office went out of use in the early 80s I have read.