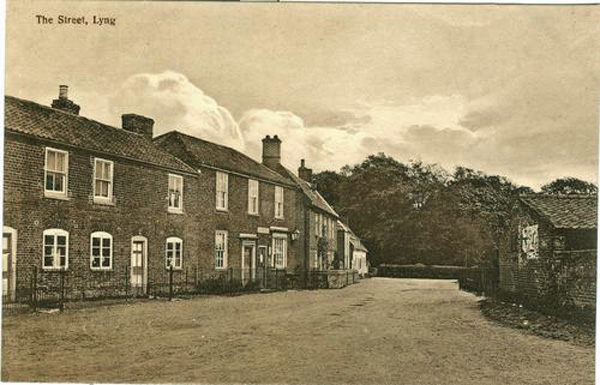 Lyng is a village and civil parish in the English county of Norfolk. It is situated on the River Wensum, some 10 km (6.2 mi) north-east of the town of East Dereham and 20 km (12 mi) north-west of the city of Norwich. ~Wikipedia

Situated in The Street, Lyng.  Continuing down the road and around the bend to the left takes you to the bridge over the River Wensum.

John Long was the Postmaster in 1900 according to the Kelly’s Directory of Norfolk.

I’m not sure but I think the first building on the left is the Post Office. It looks the right position compared to the OS First Edition…

In the 1911 Census; John Long is still living at the Post Office with his wife Celia. He was 70 years old then.  He is listed as a baker with no mention of being post master at that time…