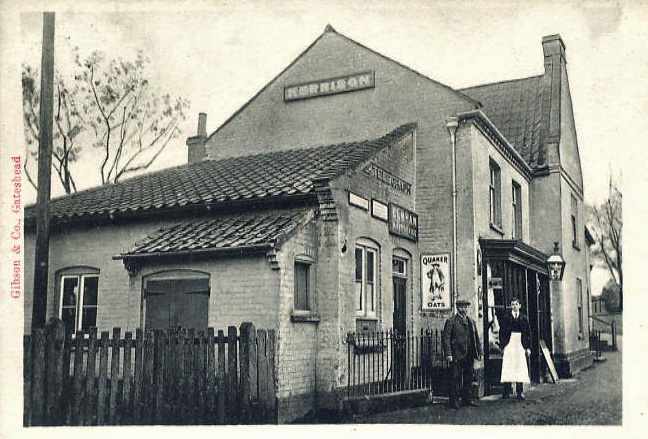 North Elmham is a village and civil parish in the English county of Norfolk. The village is about 8 km (5.0 mi) north of East Dereham on the west bank of the River Wensum. North Elmham was the site of a pre-Norman cathedral, seat of the Bishop of Elmham until 1075. ~Wikipedia

Great to see the same building still being used as the Post Office.

Still very recognisable despite a few changes, especially the signage, I am particularly liking the Quaker Oats one myself.

Kelly’s Directory of Norfolk 1900 lists Robert Kerrison as the Postmaster.  He appears again in the 1911 Census with his wife Jane. He is described as a Grocer Draper And Postmaster. The record relates to Chapel St which I assume was an old name no longer in use (there is a chapel further down the road to the south) as now it is know as Holt Road.

The name ‘KERRISON’ is proudly displayed on the old building. He was about 69 in 1911, so it’s a good bet that’s him in the hat.  The side building sign advertises that they had a telegraph service too.